A liquid cryogen is a liquefied gas with a boiling point typically below 123 K (-150°C).  The most common cryogens used at the Penn are liquid nitrogen and liquid helium.

A dewar is an insulated container used to store and transport liquefied gases. It is insulated by a vacuum between its two walls and is equipped with pressure relief device(s).

A cryogen dewar can be at atmospheric pressure, such as those used for sample storage, or it may be a pressurized vessel used for delivering liquid cryogen or gas.

See the fact sheet Intro to Cryogen Dewars for more information about the design and function of pressurized liquid-cryogen dewars.

Dry ice is frozen carbon dioxide.  Dry ice sublimates from a solid to a gas at temperatures above -78.5°C (atmospheric pressure).

Pressure-relief devices are devices that relieve pressure from cryogenic systems.  These devices may be:

(1) valves which open to relieve pressure

Some pressure-relief devices vent intermittently under normal conditions, while others are emergency relief devices.

The following hazards are associated with the storage, handling, and transport of cryogenic liquids and dry ice.  See the Hazard Controls section of this document to learn how to lower the risks of these hazards.

Although the gases created by the evaporation of most cryogenic liquids and dry ice are non-toxic and non-reactive, they will displace oxygen in the room and create an oxygen deficient atmosphere, which may result in death.

A quench (the loss of superconductivity followed by the rapid release of gaseous cryogens) of an NMR or other cryogen-cooled magnet can result in an oxygen deficient atmosphere.  The volumetric expansion rate from the liquid to gaseous phase ranges between 690 to 750 times.

The use of dry ice in cold rooms can cause increased breathing, headache, dizziness, nausea and visual disturbances due to elevated carbon dioxide concentrations in the air.  Dry ice can also cause asphyxiation in confined spaces.

Pressurized liquid-cryogen dewars are equipped with pressure-relief devices that regularly vent gas under normal conditions to maintain a safe internal pressure.  Storing dewars in a confined space or in a room with inadequate ventilation increases the potential for creating an oxygen-deficient atmosphere.  This can occur even when liquid nitrogen is not being dispensed or used.

The most common cryogenic liquids used in laboratories (liquid nitrogen and helium) are not flammable. Some liquid cryogens such as hydrogen, however, are flammable or reactive in their gaseous form.  The use of liquid hydrogen requires prior approval from EHRS.

All liquid cryogens with boiling points below -183°C (including liqui

d nitrogen and liquid helium) are capable of condensing air to liquid.  When air condenses, the nitrogen component of the liquefied air will evaporate first, leaving behind highly reactive and potentially explosive liquefied oxygen.

See the “Hazard Controls” section below for more information.

A dewar has an insulating vacuum space in between its double walls.  If a dewar becomes damaged, air or liquid can leak into the vacuum space.  This will reduce its insulating properties and can greatly increase the pressure inside the dewar.

Air or liquid that leaks into a vacuum space can freeze.  If the space is rapidly warmed after starting a transfer, the pressure-relief valve will vent the gas that is generated, preventing an explosion.

Cyrotubes stored in liquid nitrogen may “explode” when removed from the dewar:

Cyrotubes are not guaranteed to be leak tight if stored in liquid nitrogen.  Because of the “super fluidity” of liquid nitrogen, it can leak into sealed cyrotubes.  When removed from the dewar, the liquid nitrogen that leaked into the cryotube expands causing the tube to “explode”. 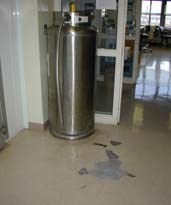 Cryogens can damage rubber tubing and crack floor tiles if spilled.  Special care should be taken to avoid spilling any cryogens.  Cracked floor tiles may also present a tripping hazard to other workers.  Notify your Building Administrator of any floor tiles that require repair.

EHRS evaluation and approval is required for any new equipment installation that requires the storage or handling cryogenic liquids except when the equipment is replacement-in-kind.

Depending on the process and cryogen volumes, ventilation studies, a written risk assessment, oxygen monitoring devices, and/or a Hazard Control Plan may be required.  EHRS will advise you on what the requirements are for your proposed equipment or process.

EHRS must also approve the purchase and installation of any oxygen monitoring devices.

The use of liquid hydrogen requires approval from EHRS.

No researcher may work independently with the hazardous material described in this SOP until the Principal Investigator (or their designee) has ensured that the researcher:

Prevent Asphyxiation due to Oxygen Displacement

Liquid oxygen forms when a cryogen-cooled cold trap is opened to the atmosphere while the trap is still cold.  This condition is especially dangerous because the combination of liquid oxygen and organic substances in the trap can form explosive mixtures.

The correct order of operations for venting a cryogen-cooled cold trap is as follows: (Source:  Prudent Practices)

It’s worth noting that condensed oxygen does not readily reach hazardous concentrations directly in the coolant bath or inside of dewars of liquid nitrogen.  Furthermore, there is less likely to be organic solvents present inside the bath or dewar, thus, the risk of forming explosive mixtures is much lower.

See Emergency Procedures section of this document for instructions on what to do if liquid oxygen forms.

Laboratory personnel must always wear safety glasses and lab coats when working with cryogens, dry ice or around dispensing lines where cold burns may occur.

The following PPE must be worn when filling dewars or removing specimens or samples from a dewar:

The following must be worn when handling dry ice:

Cryo-gloves only provide short-term protection against accidental skin exposures and are not designed to protect skin against prolonged contact.

Other types of gloves such as nitrile, leather, heat-resistant, or autoclave gloves do not provide adequate protection for any duration of contact with cryogens.

Label all cryogen containers with a cryogen warning and the cryogen’s name.

Always work with cryogens and dry ice in well ventilated spaces especially when filling dewars.  If you are working in a small space, open a door to increase ventilation.  Do not work with or store dry ice in cold rooms.

Always use a dewar or storage vessel rated for the cryogen you are refilling or transporting.  Do not use Styrofoam containers or thermos bottles for holding or transporting liquid cyrogens.  Never put cryogens in a sealed container.  It will rupture as the material vaporizes.

If skin comes in contact with a cryogen or dry ice, run the area of skin under cool or warm water for fifteen minutes (do not use hot or cold water).

Do not rub the area; rubbing can cause further tissue damage.

Notify your supervisor and proceed immediately to Occupational Medicine or Student Health, accordingly.

Occasional venting of a pressure-relief device is part of the normal operation of pressurized cryogen dewars.  Sometimes a relief valve will fail or freeze open and venting will occur continuously.

If a tank is venting continuously, leave the area and contact EHRS.  Prevent others from entering the area until the oxygen concentration in the room can be measured.

If a liquid-dispensing valve is damaged or is not closed properly after use, it may freeze open, and liquid will leak from the valve or transfer hose.  Ice buildup around the valve or hose will be evident.

If you discover a leaking cryogen tank, contact EHRS.

If you find a light blue liquid in your cryogen-cooled trap, take precautions to shield yourself from the trap using a portable blast shield or hood sash.

When in doubt, close the sash, notify others in the area, and leave the lab.

If liquid oxygen begins to warm up while the system is closed (not vented), the expanding oxygen will over-pressurize the system.

The appropriate steps for safe release of condensed oxygen are as follows: 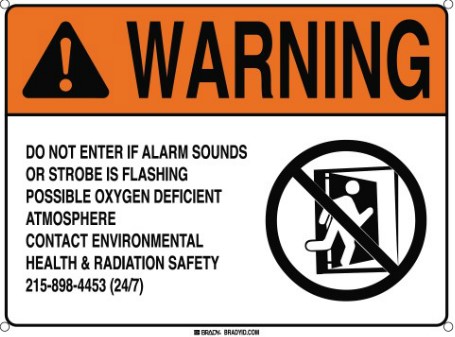 Oxygen monitoring devices with alarms and/or strobes are installed in some areas where liquid cryogens are stored and used.  The doors to these room are posted with a sign explaining what to do in case of alarm.

This SOP was based on the document “EHRS Safety Fact Sheet for Cryogens & Dry Ice” and the following additional resources: