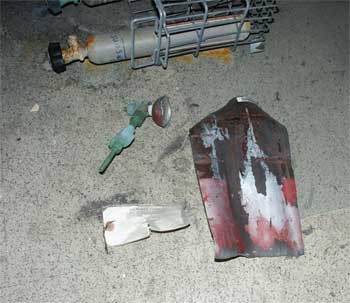 Anhydrous hydrogen fluoride slowly reacts over time with the iron in the steel cylinder to form iron fluoride and hydrogen. The hydrogen pressure can ultimately build to the point where it ruptures the cylinder. The photo above shows the remains of a cylinder that ruptured as a result of this reaction.

This hazard was discussed in a 1997 alert in the American Chemical Society publication, Chemical & Engineering News.

There is a potential overpressure hazard with the long-term storage of carbon steel cylinders containing liquid anhydrous hydrogen fluoride (AHF). AHF in such a cylinder reacts very slowly with the iron in the steel to form iron fluoride and hydrogen. The hydrogen collects in the vapor space and builds up pressure.

An AHF lecture bottle (DOT 3E) that had been in storage for as long as 14 years was found to be at an estimated pressure of 2,400 psig. After venting to a scrubber, the gas from the cylinder was found to be primarily hydrogen. Expected pressure, based on AHF's vapor pressure, would be between 5 and 15 psig.

Worldwide, there have been a few reported cases of AHF cylinders failing as a result of overpressure from hydrogen buildup after approximately 15 to 25 years of storage.

Facilities that have carbon steel cylinders containing AHF should not store these cylinders for extended periods without monitoring pressure and cylinder condition. Extreme caution should be taken during the handling of any AHF cylinders that have been stored for extended periods. As with any handling of HF, proper safety procedures should always be used (for example, protective equipment) and first aid supplies should be available in the event of personnel exposure.

The P.I. must ensure that the person or team who will be working with the gas writes a task-specific Hazard Control Plan (HCP).  The HCP must be sent to EHRS for review.  EHRS will upload the HCP to the “documents” section of the lab’s BioRAFT profile.

A template for creating an HCP is available on the EHRS website: HCP Template

The requirements for task-specific training will be determined as part of the EHRS and P.I. approval for use of this material and will be stated in the Hazard Control Plan.

No researcher may work independently with the hazardous material described in this SOP until the Principal Investigator (or their designee) has ensured that the researcher:

Special equipment is required for the safe storage and handling of anhydrous HF gas.  Contact EHRS for assistance assessing your lab equipment and experimental design.

All cylinders of anhydrous HF must be clearly dated upon receipt and discarded within 2 years.

Storage and transport of anhydrous HF gas cylinders must be in accordance with the requirements for corrosive and toxic gases.  See applicable SOP for details.

Cylinders of anhydrous HF must be entered into the campus chemical inventory system upon receipt with a container expiration date of 2 years.

The lab’s Hazard Control Plan for procedures involving anhydrous HF gas must specify any required work practices used to minimize the risks of working with this gas.

All cylinders of anhydrous HF must be discarded within 2 years of receipt.  Contact EHRS for information about the disposal of HF cylinders.

General emergency response information can be found at Emergency Info

Emergency procedures specific to the use of anhydrous HF gas must be specified in the lab’s Hazard Control Plan for procedures involving anhydrous HF.